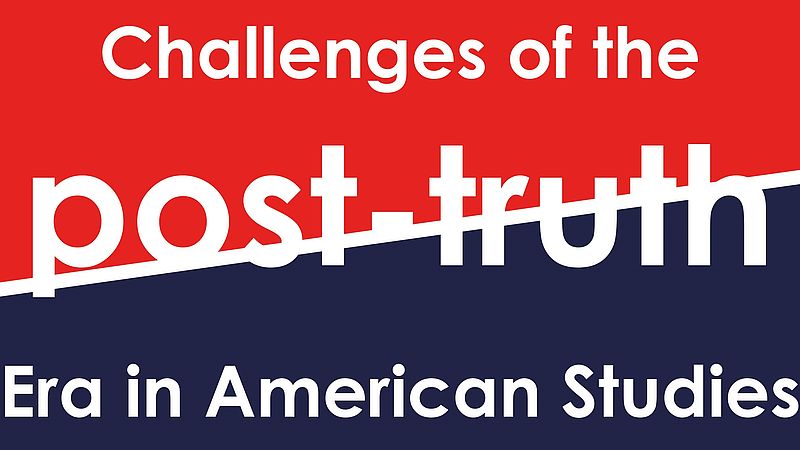 Celebrating its 30th anniversary, the Postgraduate Forum (PGF) of the German Association of American Studies (GAAS) convened at the University of Passau from December 5 - 7, 2019 to discuss the "Challenges of the Post-Truth Era in American Studies." The organizing team–Alexandra Hauke, Bettina Huber, and Thomas Stelzl–put together a program that demonstrated the breadth and quality of the academic work by young career researchers, introduced new formats to present research and engage in scholarly discussion, and included interactive workshops. The FID-AAC was present for two days to partake in the program and talk about its work and services for the American Studies research community. We archived the conference program in The Stacks, so you can access it permanently.

The greeting by University Vice President for Study, Teaching and Internationalization Daniela Wawra and the opening remarks by the organizing team both made clear that discussing notions of 'fact' and 'truth' is crucial in an era that is increasingly suspicious of science and experts. While facts and expertise are more important than ever to make sense of our complex surroundings, great parts of the public have lost their trust in educational, political, and social institutions and base their understanding of reality more on ideology and sentiment. In this Post-Truth Era then, the organizers stated, it is paramount to analyze the dynamics that nurture misinformation, filter bubbles, and fake news. As usual, however, the PGF not only invited papers related to the main focus of the conference but also welcomed presentations on diverse topics in American Studies.

The conference started with a panel on "Identity, Sexuality, and Narratology" and was chaired by Isabel Kalous (Gießen). It brought together three distinct perspectives and methodologies in approaching questions related to these three categories. In his talk "Closeted Narratology" Florian Zitzelsberger (Passau) called for an update of the structuralist narratological concept of metalepsis. He argued that metalepsis, understood as a transgression of internally hierarchized narrative worlds, could be analyzed as a queer signifying practice if the normativizing structuralist framework from which it originated was to be reevaluated. Selina Foltinek (Bayreuth) spoke to the advantages of taking a postcritical approach in analyzing narratives from different time periods about female same-sex relationships. In "The Creative Potential of Literature" she demonstrated how phenomenological and reparative readings that focus on positive knowledge can be employed to examine social issues and shift public debates away from an overemphasis of the hermeneutics of suspicion. In her presentation "Transmedial Negotiations of Sexual Violence in When They See Us" Mascha Helene Lange (Leipzig) discussed how the Netflix series by Ava DuVernay strategically intervenes into racialized and stigmatizing discourses surrounding the story of the so-called Central Park Five. Lange showed how the seriality of the narrative, together with its uses of intertextuality and metalapsis, work to reframe these discourses and reestablish themes of justice and truth.

In their efforts to open up the conference to a broader public, the organizers arranged the panel discussion "Fake News? Europe und die USA im Desinformationszeitalter" with four professionals who engage with fake news in different contexts: the politician Christian Filsek (SPD), who was part of the official NSA investigation committee in 2014; the author and journalist Bettina Horaczek, whose work focuses on the political and social effects of right-wing propaganda in Europe; Carolin Jansen, member of the federally funded project DORIAN - Exposing and Combating Fake News; and Johannes Völz, professor of American Studies at the University of Frankfurt, whose most recent work deals with populism, polarity, and fake news in the US. Two hours of constructive discussion covered a lot of ground, including the effects of echo chambers and algorithms on our daily news consumption, the cultural dimensions of populism and polarization within Western democracies as well as the influence and rhetorics of sentimentality on public debates.

The panel was also quite successful in formulating concrete solution strategies for the audience: Teaching media literacy has to be prioritzed on all levels of education and public debate. Journalism should not report disproportionately about recent societal and political developments and should more often reflect on the metalevel of events to illuminate the bigger picture. Specifically for American Studies scholars in Germany two important points were raised that need attention and further discussion: 1) American Studies scholars are underrepresented in news coverage on recent developments in the US to contextulalize and explain their (historic) reasons and (long-term) effects because 2) American Studies as an academic field has arguably stopped to offer action models and frameworks useful for public debate. Therefore, such was the overall consensus of the discussion, it is crucial to continuously and relentlessly discuss and reflect upon the current political climate on the platforms each participant is given.

Day two of the conference started with a large panel on the "Transnational Dimensions of American Studies" and was chaired by Juliann Knaus (Graz). First speaker of the day was Chang Liu (Heidelberg) who traced the "Afterlife of American Musical Waste" in China to examine how the global politics and economics of waste leave physical as well as cultural imprints on nations along the lines of class, race, and ethnicity. Chris Katzenberg (Bochum) then talked about "Postindustrial Urban Change across the Atlantic" and the urban 'ghetto' in the 21st-century contexts of urban reform, social mobility, and transatlantic exchange. Third speaker of the panel was Natasha Anderson (Mainz) who reflected in her talk "Outsiders Looking in" on the mediating and defamiliarizing role of three non-US-American comedians as political commentators within the American media landscape.

After a short intermission, Julia Wewior (Wuppertal) continued with her talk "Conflating War and Migration" in which she talked about the exception discourse in the novel The Framing of Bones. She showed how the novel's depicition of Haitian migrant bodies in the Dominican Rebpublic as unimaginable, unintelligible, and ungrievable anticipates problems of the post-truth era and offers strategies to work through them. In her paper "Legacies of Im/Mobilization" Sigrid Thomsen interrogated the cane field as place of extreme violence and im/mobility in the work of Edwidge Danticat, Junot Diaz, and Roxanne Gay. She thus spoke to the importance of sugar-related discourses of place and non-place in Caribbean narratives.

Next on the agenda was the new format of the poster session "The Many Faces of American Studies." Five early career scholars presented their projects and ideas accompanied by their poster to smaller groups of participants. These groups, selected according to icons chosen at the registration, travelled from poster to poster every thirteen minutes. It was a very engaging format that enabled lively and direct discussions with the presenters and furthered a deeper understanding of the status and scope of the respective projects.

The afternoon session was an interactive workshop on "Teaching American Studies," led by Viola Huang from the SKILL-project at the University of Passau. The 90-minute-workshop was aimed at answering questions of how and why university teachers do what they do and offered strategies how to mediate knowledge, knowledge production, and knowledge use via new media and technologies. Special focus lay on teaching media literacy, a practice central to democracy, participation, and critical thinking. Huang emphasized the importance of conveying skills to produce knowledge rather than consuming or collecting knowledge and showed ways in which new media can be integrated in the classroom in meaningful ways. To explore these ways further, the participants were divided into six groups according to interest and were tasked to discuss and conceptualize different aspects of the American Studies classroom and give short presentations about the group's results at the end; these aspects included "space," "content," and "digitization and technology." The short presentations at the end of the group activity powerfully showed the potential of teaching American Studies with a focus on media literacy, but also exemplified the challenges and hindrances in implementing new approaches.

The day ended with the "PGF Meeting" during which the PGF-representative for the GAAS, Judith Rauscher, shared her annual report. Furthermore, COPAS: Current Objectives of Postgraduate American Studies, the peer-reviewed journal that publishes the proceedings of the annual PGF meetings, as well as the Libary AAC introduced their services and possibilities, such as the subject repository The Stacks where the conference's program has been archived. The meeting was followed by networking opportunities during a visit to the historic Christmas Market and dinner afterwards. Unfortunately, the representatives of the Library AAC could not stay for the third and final day of the PGF conference, but if the last day was anything like the first two, it was engaging, people-oriented, scholarly excellent, and well-organized. Thank you for such a welcoming atmosphere in which young American Studies scholars discussed their own projects and the challenges of fake news, post-truth, and populism in a productive and solution-oriented way.