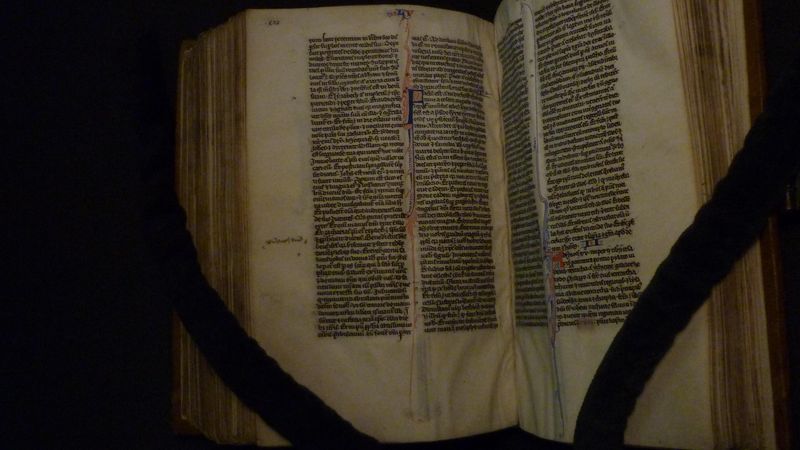 Our Christmas image shows the familiar words of the Christmas gospel in Luke 2 in Latin ("Factum est autem in diebus illis..."), decorated with a red and blue fleuronné-initial in one of SUB Göttingen's Latin bibles. The 14th century manuscript of English origin is only 14,5 x 9,5 cm in size and was written on thin parchment in a tiny, very neat script. This bible is one of the many medieval books in SUB Göttingen's holdings which show traces of their history from the time of their early use until today.

Even though it is nearly impossible to reconstruct the complete history of a book of this age, a manuscript can still tell us something about its changing contexts and uses. Script, decoration, size and material point to the value, meaning and function of a book for its first owner as well as to its time and region of origin. Notes of its early readers can tell us something about their reactions to the text, personal entries allow to perceive fragments of lives long gone, ownership entries bring names, places and professions of readers into view. Fortunately, the encompassing library archive of SUB Göttingen often allows to reconstruct how a book came to be part of our holdings, uncovering another link in a long chain of different usage contexts.

The bible shows entries from around 1400 mentioning a family Theronde and was given to a monk of Winchcombe abbey by a man called Hugo Leye in 1512. In the 18th century the manuscript was owned by César de Missy (1703–1775), a theologian and chaplain of George III. César de Missy collected manuscripts of the bible for a new edition of the New Testament. This one he acquired in 1746, as his exlibris documents. After his death his collection was sold and the manuscripts are now kept in different libraries. SUB Göttingen owns four of the New Testament scholar's medieval manuscripts, three of which were given to the library by Johann Reinhold Forster (1729-1798) in 1776.

Tracing the little medieval bible's history thus leads us right into the circles of London scholars in the 18th century, showing how the book's readerships and usage contexts changed over time. The single steps of this bible's history remain still to be examined in detail, which will happen in our current manuscript cataloguing project.

The Library AAC team wishes you a merry Christmas and a happy New Year!

Look them up in our manuscript catalogue.