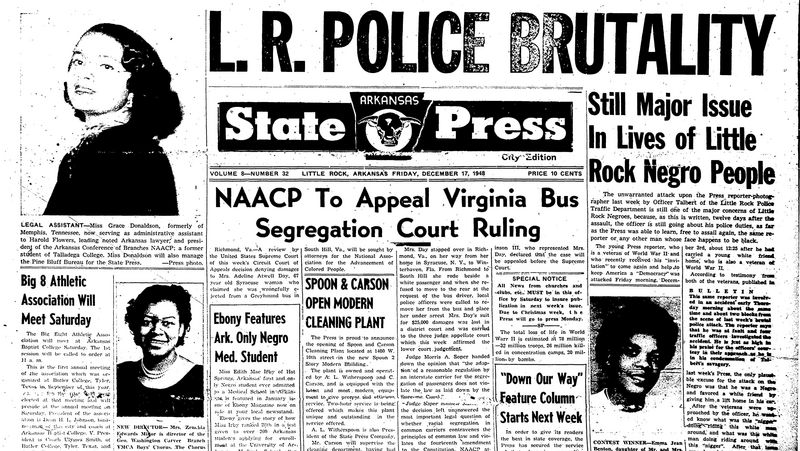 This headline from the Arkansas State Press is more than seventy years old. Sadly, it could have been taken from today's paper, except for the use of the term "negro." Especially now in the era of fake news, post-truth and alternative facts, current problems require a historical perspective and one of its most immediate expressions can be found in the newspapers of the past. We are therefore happy to announce that our partner the Library of the John F. Kennedy Institute for North American Studies has just recently licensed the comprehensive database African American Newspapers (Series 1 & 2) by Readex. The database spans one and a half centuries of African American publishing and contains more than 350 titles that cover such aspects as: life in the Antebellum South, the Abolitionist movement, growth of the Black church, the Jim Crow Era, the Great Migration, the Harlem Renaissance, and the Civil Rights movement.

The database contains such eminent publications as Freedom’s Journal, which is considered to be the first African American newspaper in the United States, Frederick Douglass' famous North Star, and Marcus Garvey's Negro World, but also many regional, lesser known papers. The search interface of the database will be easy to navigate for users already familiar with Readex's America's Historical Newspapers. It allows the browsing of titles by such criteria as title, date range or location, but also offers more advanced search options, and tools for citation and download.

Both series of African American Newspapers can be accessed here: Series 1 and Series 2

Similarly to our recently announced database Gender: Identity and Social Change wide accessibility is guaranteed through a national license for Germany that allows all users of German university libraries to explore the collection via the database information system DBIS.

And if you would like to make a request for future databases, fill out this form and let us know.